How to weld thin metal

The thin metal technique is a non-continuous process that is used for thin metal such as car body panels.

The aim with this technique is to melt a bit of metal and then let it cool slightly before melting the next, and it's a handy way to avoid blowing holes.

The butt weld page showed how to do a seam weld using a continuous torch movement. Try applying that technique to steel less than 1mm in thickness and you are likely to blow a hole in the metal.

The photo is 1mm steel welded at a power setting normally reserved for 2mm steel. 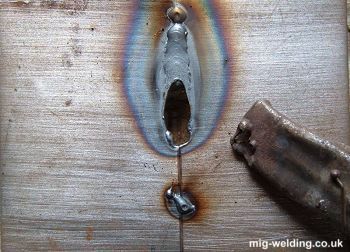 You can see what's happened from the photograph. The puddle of molten metal has become so big and heavy it's dropped off the steel.

Often this can be prevented by reducing the amp setting of the welder and the wire speed. Using thinner wire (0.6mm instead of 0.8mm) will also help reduce amps. 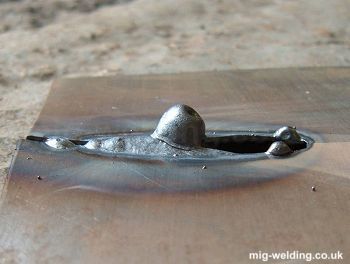 The way around this is to weld in short pulses, allowing a second or less between pulses for the steel to cool down. In the video I've left about a second between pulses. These days I'll normally leave less than half a second. The longer you leave the more chance you'll have of cold joints and pinholes between the welds.

Turn your sound on for best effect. The movie is about 1.4MB so will take a little time to load.

The steel is 0.8mm thick and the welder power was set to minimum.

The effect is quite neat, though this is a cold method of MIG welding. The danger with this technique is the individual beads of weld might not melt into each other fully resulting in a weak joint.

For thin metal this isn't a problem, but a continuous weld seam weld would be much more appropriate for steel over 1mm. 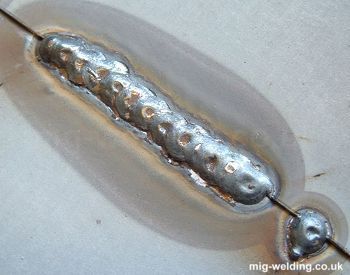 The penetration is higher than might have been hoped, but the weld is perfectly strong enough. 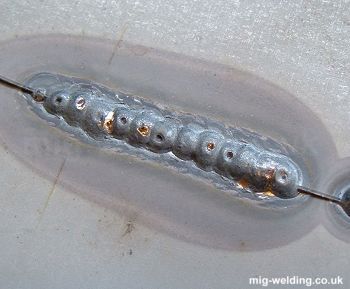 The stitch welding technique can be very powerful. Here's a shot of 0.3 mm stainless cut from a 5L thinners can that was welded in this way. I was hoping to manage a butt weld too, but the metal was far too thin for MIG and I just blew holes.

TIG welding is the way forward for metal under 0.6mm, and a MIG welder with decent power and wire control is needed for anything less than 0.8mm. 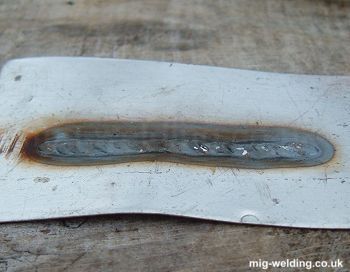 If you are welding a large panel then the expansion of the metal during welding is likely to cause the panel to distort. The problem is that the panel expands with heat, so while it is the correct shape during welding (when the panel is hot), the panel changes shape on cooling.

Distortion can be minimised by first tacking the metal together at intervals of maybe 20mm, and only welding very short sections (20mm length) at a time, allowing the metal to cool between each section of weld. If you have a long seam then the first section might be at one end of the seam and the second at the other etc. The technique is discussed a little more in welding floor panels.

Another welder suggested cooling the panel (not the weld) with a wet cloth between sections (which sounds like a good idea though I've never tried this technique), and a brass block placed behind the weld can be effective for soaking away the heat.

The transformer has to work hard to start the arc. This technique relies on the arc starting and stopping regularly, so bear in mind the duty cycle will be much shorter than for normal continuous welding on the same setting, so the welder will need longer breaks from welding to allow it to cool down.