How far to go? It's easy to get carried away as a restoration progresses. I often start off with the intention of a few quick repairs then find more to do than I first thought.

I went to a bit of effort prior to this restoration in building a chassis jig and a suspension jig. Actually those jigs were intended for a different project where the chassis had already rusted enough to lose it's shape.

This chassis is for my Renault 4 Gordini project. The chassis looked reasonably OK when I bought the car, but plastic underseal can hide a surprising amount of rust.

The plastic underseal was a pain to remove too. I used a hot air gun to soften it then scraped it off with a knife.

I'd intended to patch the floor at the corners where I knew it was rusty, but having removed the underseal the rust looked a lot more extensive. I've ringed the areas that would need attention, but there could be other areas starting to rust from the inside that weren't yet visible. 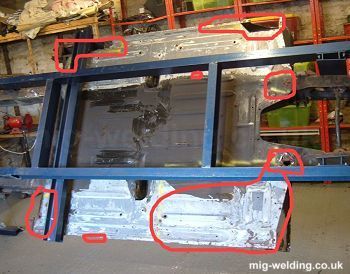 Floor pans are easy to remove if you have access to the spot welds. There are a couple of good methods.

The spot welds can be removed with a 7mm drill bit so the hole is already there for plug welding from the other side later on. Special flat ended spot weld removal drills are available and can cut out the spot weld on one panel without damaging the other. I have one but it's very time consuming to drill out welds using this approach.

I plan to plug weld from the underneath and didn't want any holes in the other panel. Angle grinding until the metal gets red hot and just makes a hole in the panel weakens the spot weld enough to allow it to be popped off with a screwdriver. 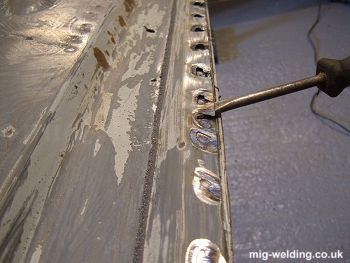 The chassis is now very floppy. I have an attachment for the jig that holds the floor at the correct height, but with that removed the chassis droops by 15mm on the side where the floor has been removed. Good justification for doing one side at a time.

I'm using a jig to keep the chassis straight, but the chassis could be just as well supported by setting it up level on the ground with blocks of wood underneath for support. There are some more thoughts about setting up on the sills page. 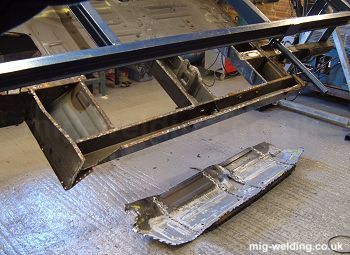 All of the surfaces that will be welded have been cleaned to shiny metal. 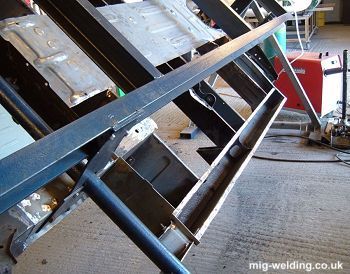 I had hoped to buy a complete floor, but these are no longer available so I was stuck with my aftermarket repair panels. They aren't so bad but needed a lot of trimming to fit, and as they only cover 1/3 of the floor I'd need two very long seam welds.

The panel in the photograph has been drilled for plug welding. I've gone for 7mm holes at 1.5 inch spacing. The primer has been removed around where the plug welds and seam weld will be. 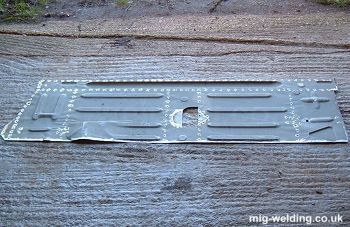 An overlap weld would have been the sensible way to weld the floor panel, but the repair panel is from a slightly different model and the swaging pattern didn't quite line up. I decided on a butt weld in the end. Not so much fun joining the original 0.8mm sheet to the 1.0mm repair panel along a 1.5m length.

Lining up the two panels was fairly easy as I'd trimmed the edges straight, but some points were still closer than others. That's not a bad thing, as the first tack welds will tend to draw the two sheets together and if the edges started off touching all the way along they would soon start to overlap.

I tack welded the parts that were touching first, then the next parts that touched and so on. With the two panels secured together further tack welds were added halfway between existing tacks until there was a tack every half an inch.

The tack welds can be made at a fairly high power. I was welding them between 1 and 2 settings up from the normal setting for this thickness of metal. 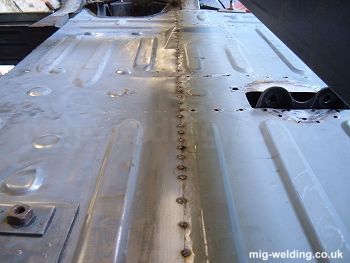 With the tack welds in place I started plug welding. It would probably have been sensible to put in a few plug welds before tacking the join to help prevent the two sheets from pulling together. I shall try that out on the other side.

Plug welds were made from the middle of the floor pan outwards, moving between flanges to allow the panel to cool between plug welds. The idea was to allow any distortion to travel out of the panel, rather than welding from each end and ending up with a bend in the middle.

I don't have a clamp big enough to fit around the floor panel so I used a hammer shaft to press the floor against the flanges for welding. 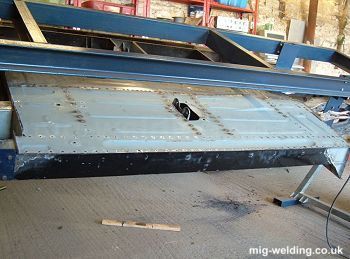 Distortion is always a risk when welding a long seam on a flat sheet. Distortion is caused by heat build up in the panel, so the way to reduce distortion is to weld small areas at a time and allow the area time to cool before doing any more welding nearby.

A 1 inch seam was made 1/3 of the way along the floor, then a second further along the floor. Further seams were welded between those seams and so on until the the joint was fully welded. A complete seam probably took around half a day, allowing plenty of time along the way for everything to keep cool. 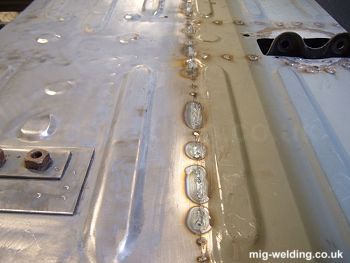 I've been trying to learn TIG welding, and the floorpan made for good practice. The welds have ended up a little flat and aren't TIG neat, though the join itself is quite sound.

TIG is very sensitive to torch position, so having the chassis mounted at a good working height and having a chair to sit on while welding were very useful. 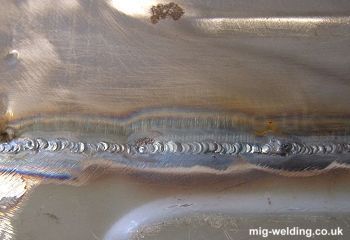 The completed floor looks almost convincing. I've ground down the 300 plug welds just for the sake of keeping the floor pretty, but haven't finished the TIG welds.

I've drilled 9mm drain holes at the lowest part of all the box sections which should help the box sections to vent as well as providing handy holes for waxoyl injection. The lower part of the floor will most likely be stripped, self etched, sprayed with anti-stone chip primer followed by 2 pack paint. 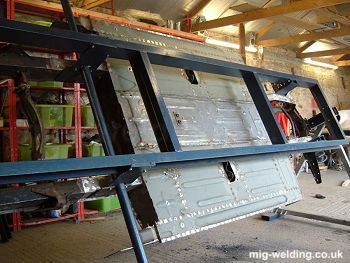