How to strip paint from car panels? The only way that's not a pain is when someone else does it, and then it's expensive.

I'd considered chemical dipping, but decided I wouldn't be able to repaint the hidden areas the chemical dip removed. There's more discussion about the alternatives at the bottom of the page. But first the cool new way I found of doing the job.

This is a "Clean & Strip" or "Poly Abrasive" disc for use on an angle grinder. It's like a sponge that's been covered with glue with sand in it. I bought one to test and immediately bought 10 more (and they are about £4.50 each!).

They are very effective. They'll cut fairly quickly through paint without clogging or damaging the steel. Good for getting rid of surface rust too, though that seems to wear them away quickly. I've been cleaning up rust first with a wire brush attachment before finishing with the Clean and Strip discs. 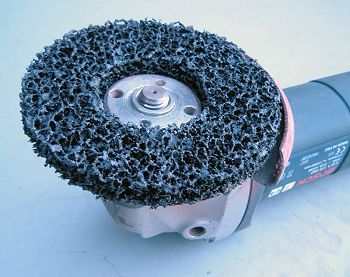 They are excellent for getting rid of paint. Brush some paint stripper on to soften the paint and the strip & clean disc takes it off incredibly quickly. Took maybe 30 seconds to remove the paint completely from this section of the door. Incredible. And the thing didn't clog up at all.

Be sure not to use paint thinners and go for one of the more environmentally sound paint strippers without the explosive fumes! These discs can spark on bare metal, and the angle grinder motor will be sparking all the time. 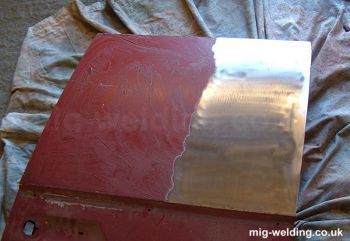 The whole door took about 1.5 hours to strip completely to bare metal on both sides. Though the strip & clean disc was only used on the flattish surfaces. I used wire wool and paint stripper for all the fiddly corners which is what took the time. Those would have worn away the strip & clean disc very quickly.

The sanding marks left behind are very light - they can be removed by a quick hand sand with 120 grit sandpaper. 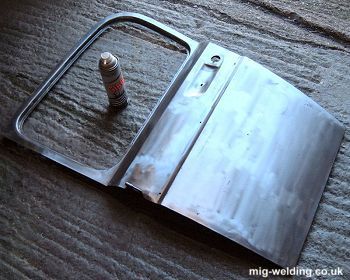 Here's the Renault so far. It's getting late in the year (it's the start of October at the time of writing), and there are still lots of welding repairs to do.

The car won't be painted until after the winter. I'm using another new toy to protect the paint - "Gibbs Brand" Lubricant. It's a bit like WD40, but includes a rust inhibitor and is over-paintable so it doesn't matter if it gets stuck in the seams. It's commonly available in the USA, but is more difficult to locate in the UK. 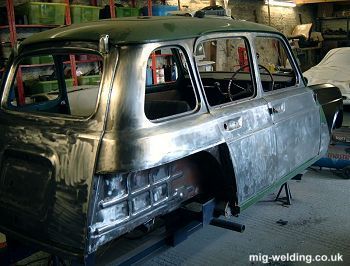 Strip and clean discs can now be bought from the shop on this website together with a number of other speciality discs.

What are the other alternatives for stripping paint?

I considered a number of alternatives for this project. Also there are other things to strip like underseal for which the strip and clean discs would be rubbish. Here are my thoughts on various ways of stripping:

Most people that do sand blasting use great big high pressure rigs so an even greater chance of bending panels. Anyone looking at blasting thin metal seems to use media blasting instead using things like walnut shells or plastic beads.

I had planned to have the whole car dipped. But dipping removes all paint even from inside inaccessible box sections. Most cars built after 1980 will have been paint dipped during manufacture, and it's a shame to remove all the paint the manufacturer has added to all those inaccessible box sections (especially as it would be impossible to get new paint back in). Others have raised concerns that it's difficult to wash out all the acid after dipping, and acid in my seams was the last thing I wanted.

Some companies offer an e-coating (primer dipping) service after chemical dipping, but the price for stripping the Renault and having it e-coated would be £3,000. That's more than the car will be worth.

Wire brushes work well when used with paint stripper, though there's a lot of cleaning up of the residue to do afterwards, and finishing off with wire wool and paint stripper. The wire brush attachment works well for plastic underseal or anti-stone chip though. Especially when the plastic stuff has been softened using a heat gun. It's a messy job though, and I tend to alternate between the wire brush and an old table knife (both used with the heat gun) for that sort of work.

A hand held wire brush is handy for using with paint stripper if there is a lot of paint in a fiddly area. Though again that needs to be finished off with wire wool.

More abrasive than the strip disc and prone to clogging. Good for finishing welds though.

I use stainless steel wire wool. It's available in big rolls from exhaust suppliers such as Millner Off Road. Be careful of the stuff though. I used to tear wire wool from the roll before a single strand decided to slice through my finger rather than tear off. Now I use scissors to cut it from the roll. In conjunction with paint stripper it's a great way of removing thin paint, or the remainder from tricky spots after some other paint removal process.

A heat gun used with a scraper is ideal for removing underseal and plastic coatings, but might distort flat exterior panels.

This features in a lot of the methods above. It can be used with a scraper or table knife, but the methods above are all quicker. Be sure you get a decent brand though. The unbranded or store branded paint strippers are a lot less effective. Wear rubber gloves and maybe a mask too - makes me feel unwell when the stuff gets into my system.