The standard primer system in the UK is a highly adhesive primer (self etch) followed by a high build primer which is flatted to provide a smooth surface for colour coats.

This page describes application and flatting, and also primers used elsewhere on a vehicle, and by people elsewhere in the world.

Note self etch primer is out of fashion. Most people these days will use an epoxy primer instead which sticks well and is waterproof so you don't need to apply top coat quite so quickly.

Self etch primer (was) recommended for bare steel, aluminium or GRP, and it won't flake off like a filler primer can. It contains an acid which burrows it's way into whatever it's being sprayed onto. That's handy for bare metal with body filler, but it can burrow under and lift existing paint or sealant, so it's not so good for repairs.

Paint tends to run when applied directly to bare metal (even more so when bare metal is mixed with a plentiful quantity of body filler - runs start at the interface between the filler and paint). The way around this is to apply a thin mist coat of primer before the first complete coat. Here the panel has been sprayed with a mist coat which will be allowed to almost dry before the full coat goes on. 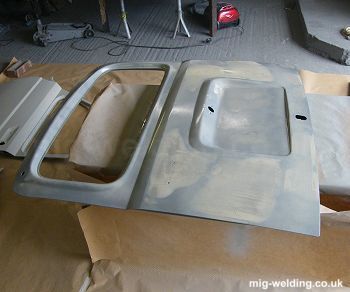 After the mist coat the full coat should go on as normal without runs. The photo shows a panel mounted horizontally, but the mist coat helps even more with vertical panels. 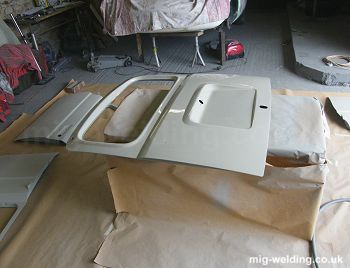 High build primer is available in cellulose and 2-pack. 2-pack requires a greater level of safety equipment than cellulose, but will tend to go on thicker and smoother than cellulose, and does not suffer from sinkage to the same degree. I've applied two coats on the outside of the car and a single coat on the inside.

Care should be taken not to build up excessive paint thickness at door edges or they will be prone to chips. 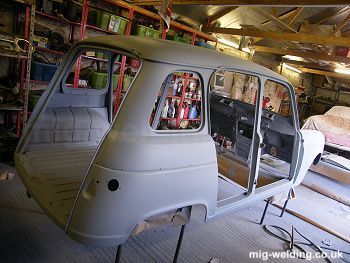 Flatting with a guide coat

A guide coat is a thin mist of colour applied over high build primer and then wet flatted off. Initial sanding will remove the high points, and it is only when the whole of the guide coat has been removed that the high points of the panel will be level with the low points - then the surface will be completely smooth and ready for top coating.

Guide coat sanding is done immediately before the colour coat. My approach for a guide coat is to mix evenly colour with primer then add at least 75% thinners. The primer content aids sanding and thickens the guide coat so it doesn't disappear before the panel is flat. Using the top coat colour prevents problems with painting over any guide coat that isn't completely sanded off. 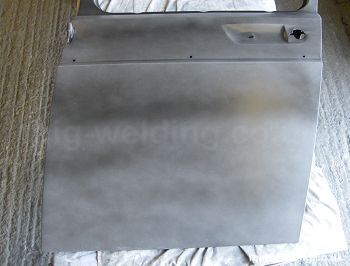 600 grit wet sandpaper is appropriate as a base for the colour coats.

I'm sanding with a sanding block just about visible on the door panel above the part I'm flatting. A sanding block is useful as it doesn't follow local depressions in the panel as much as hand sanding. 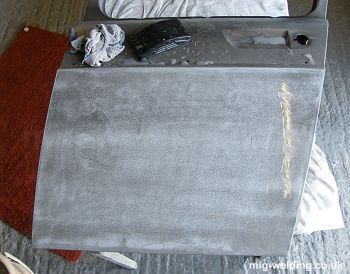 The areas still coated with guide coat after further sanding are the ones I got close but not quite right with body filler.

It's very useful to have a first high build primer coat in a different colour so you know when you have sanded through the body filler and are getting close to exposing bare metal. I've used high build self etching primer on this car, so stop when I see the layer of yellow paint.

You have to be careful on panel edges though - a single wipe with the sandpaper can remove the filler primer and all of the self etch in one movement. If this does happen spray a little more primer on the area and flat it into the panel without guide coat. Edges are best finished by hand sanding. 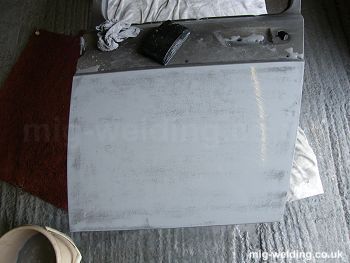 Don't use any wetting agent (such as soap) during wet sanding - it can be difficult to completely remove from the panel and can contaminate later coats, and in any case it's not necessary for primer.

Here's the finished panel. The photo doesn't show up all the bits I've left. The area around the door handle will be hidden by the handle itself, so there's no point risking sanding too much around those sharp edges. Also the window frame on this car has a lip left when the panel was pressed which could easily be sanded to bare metal, so I backed off on sanding before the guide coat had been removed.

Flatting with a guide coat leaves a good flat surface to spray colour coats onto. Any paint disasters from here should be sortable by sanding or polishing colour coat without any risk of going back into the primer, and because the base is flat it will be possible to flat the colour coats to leave a completely flat mirror finish. 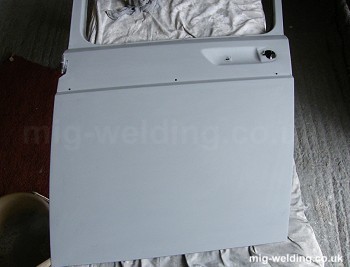 It always used to be the case that self etch should be oversprayed with primer as soon as it's dry. If the paint is left overnight it can absorb moisture which weakens the bond to the steel panel. I believe this is the case with chromate based self etch but not phosphate based (but I could be wrong). Self etch shouldn't be applied over body sealant - I guess because it etches under the sealant and lifts up the edges.

High build primer forms a thick coat of paint that is suitable for sanding. It is not suitable for applying straight onto bare metal (it would flake off). Cellulose and 2 pack high build primers are commonly used in the UK. In the US it is common to use epoxy based primer.

Red Oxide (otherwise known as red lead) was effective in the old days, and was famously used on the Forth railway bridge. The active ingredient was lead tetroxide which along with other lead paints could cause lead poisoning, and it has been withdrawn from use.

Red lead paints produced since the 1990s don't actually contain any lead. The red colour is just a pigment added by the marketing people to take advantage of public memory of real red lead primers.

Primers that stick very well to bare metal tend to contain zinc phosphate these days. The zinc in the zinc-phosphate primers don't offer any galvanising protection - it's just there to bond to the metal which it does very effectively. Boat builders (and they are the ones to ask about rust prevention) tend to use it as a primer for the superstructure, but not for underwater.

For underwater protection boat builders will tend to use zinc primers. These will contain 90% zinc by weight and offer some degree of cold galvanising protection. They are available in epoxy or natural thinned. The natural thinned paint is said to be more effective, but it's adhesion is poor - it is important to sand blast the bare metal surface to provide a rough surface for the paint to bond to, otherwise it can be scraped off with a finger nail. Any exposed areas should be overcoated in anti-stonechip paint.

The mechanical properties of high zinc paint are poor, but it's anti-corrosion properties are very good.

Generally rust neutralising treatments for automotive work will contain phosphoric acid which reacts with exposed rust to create black iron phosphate which helps neutralise and seal in the top layer of rust. A good wire brush will help ensure the top layer is also the bottom layer, though a preparation such as sandblasting would get rid of the surface rust altogether and allow you to use one of the more effective primers.

Most replacement body panels are supplied coated in a good quality etching primer. There should be no need to remove this paint before painting. On the other hand some replacement panels from less reputable manufacturers have been known to be sprayed with a poor quality paint that will flake off in use.

To find which you have test the panel with cellulose thinners. If the paint comes off it is probably not a suitable primer and should be removed. Another test is to rub a hidden area with a coin. If the paint is removed to bare metal or flakes it should be removed. For a full restoration project I'd tend to remove the paint anyway, but for a repair the black paint can often be keyed with 400 grit wet sanding and overpainted.