Most air compressors sold for DIY use are not suitable for paint spraying because they have no means of removing water from the compressed air.

I spent months spraying cars before I cottened on to this. All of the cars I painted ended up with small blisters in an otherwise perfect paint finish.

This page shows how a compressed air supply can be set up to achieve a reasonably dry air supply for painting.

DIY compressors normally have regulators mounted directly on the air tank and do not make any real attempt to remove water or oil from the air supply.

Air is heated when it is compressed and carries more water than cold air at the same pressure. As the air passes through the outlet of the tank or is decompressed in a regulator it cools. This causes excess water to separate, so the output from a DIY compressor will be a combination of air and water droplets.

A professional compressed air installation will include a dryer which cools the air to separate out the water, then filters the remaining water from the air. These are impractically expensive, so this page covers DIY alternatives. 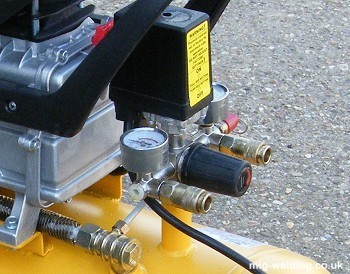 Water droplets from an unfiltered supply are especially unhelpful when spray painting. In cold weather it's possible to see the water condensing when spraying an air gun at a cold panel.

This is a photo of some paint sprayed around 5 years ago with a cheap compressor similar to the one above. You can still see the evidence of small blisters in the paint. They were caused by water in the air supply.

It didn't help that I was spraying late in the year and the panel was cold. The problem is reduced in the summer when more water vapour will travel away with the air rather than condense on the panel. 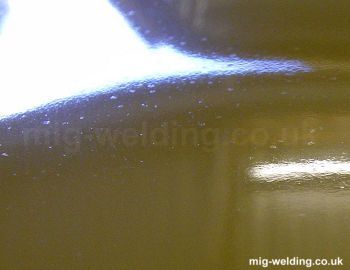 Don't worry, there's a simpler system further down the page. But first a schematic of my system to help you see what's going on in later photos. It's more complex than you might need as it's purpose is to move air from one building to another.

My system is very much designed to fit the building. The main points are:

Belt driven compressors tend to be significantly quieter than direct drive compressors. When selecting a compressor go for as much cfm as you can afford. The tank size only affects the time you can use an air tool before the air pressure drops too far. With more cfm you reduce the likelihood of the tank discharging. Compressors are very easy to under-buy.

Location of the compressors is important. If they are inside the garage you'll get a lot of noise, and won't be able to use an air fed mask (the compressor would feed you fumes). Mine are in a small shed near the garage. 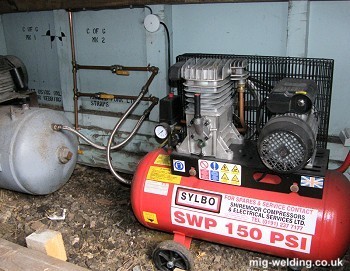 Air stored in an air compressor tank is hot. It can be cooled to some extent by passing it along a copper pipe and this separates some of the water from the air. Horizontal piping should be angled downwards in the direction of flow so that water droplets are pushed along with the air rather than backing up in the pipe. A slope of 1 in 100 is the minimum generally recommended, but the steeper the better.

Every few meters or whenever the height of the pipe has to be increased a riser and drop leg can be added (as in the photo). Water will tend to run into the drop leg and can be released from the system using a ball valve at the bottom of the drop leg.

A long pipe system for the sake of it would probably be less effective than a cheap in-line water trap, though a small system to bring compressed air to a regulator mounted on a nearby wall would benefit greatly from one of these drop legs. 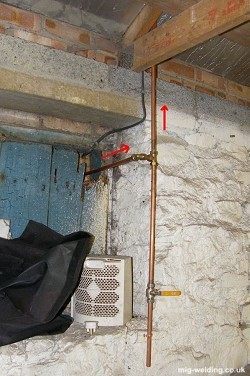 Most compressor and pipe thread in the UK will be to BSP sizes. Seems the thread size refers to the inside diameter of the pipe rather than the thread itself which can be confusing especially when a lot of pipe seems to be sold by outside diameter. So 8mm pipe has 1/4 bsp fittings, 10mm 3/8 bsp, and 15mm 1/2 bsp. Water or gas pipes and fittings tend to be rated to 12 bar (175psi) and are more readily available and normally cheaper than the same things sold as air fittings. Careful though - the rating for air can be less than the rating for water. The compression fittings on this page are rated to 7 bar (100 psi).

Various types of piping can be used for compressed air. I've used copper pipe (it is conductive and helps cool and dry the air) and compression fittings. Soldered fittings can also be used and are cheaper. Some types of plastic pipe can also be used, but the fittings tend to be expensive. MDPE plastic piping can be used, but PVC pipe should never be used as that can shatter sending sharp shrapnel around the workshop.

My own system is constructed with 1/2 inch pipe and fittings which I've calculated will result in a 2.5psi drop over 100 feet of pipe when running 14cfm at 100psi. Google for "compressed air pressure drop calculator" and mind the popups. A system with a greater air supply or longer pipes might need to use larger diameter pipe if pressure drop is important to you.

Watch you don't mount electrical sockets near the water drains. Can you spot the bad practice in this photo? The drains now have rubber hoses attached. 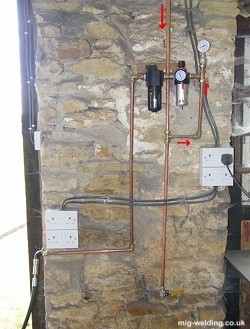 The device with the gauge is a filter regulator and it's fitted in the air supply before the oil and particle filter. The bowl in the regulator will remove further water from the air supply, and will reduce the pressure of the air. Also the regulator does a little initial filtering to reduce the rate of blockage of the coalescent oil filter.

The oil filter is necessary as a compressor will add small amounts of oil into the air through it's cylinder lubrication. These wouldn't be good mixed in with paint.

A system that's in use all of the time will block it's filters quickly. So filters tend to be protected by another filter or two of increasing particulate size. Norgren (filter manufactures) publish an informative pdf regarding filter choice for various applications. 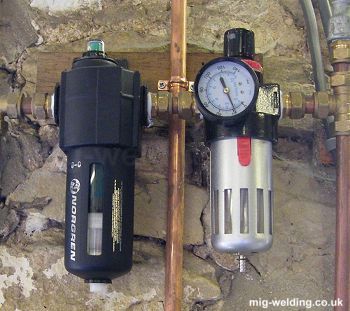 A simpler version of the system above which would give 80% of the benefit is illustrated to the left. A filter regulator might be mounted on a wall above the compressor, and fed by a flexible hose from the compressor with a drop leg to remove excess water prior to the regulator. System pressure could be read from the compressor.

The standard regulators on DIY compressors can be restrictive, so performance of the compressor could be improved by using a 1/2 inch regulator.

The system described on this page is to a DIY standard. A professional standard spraying system would include a refrigerated drier after the compressor, and additional filters down to 0.1 micron in size.

For my purposes the system provides a reasonably dry and clean air supply for occasional spraying. A considerable amount of water is removed by the drop legs and the regulator bowl rather than passing through the spray gun.