The technique for butt welds is very similar to the technique used in the TIG technique page - if the two sheets were positioned edge to edge with no gap the technique would be exactly the same, and generally that's what you would do for material thinner than 2mm. On this page we've spaced the two sheet of 2mm stainless steel apart by 1mm to create a root gap. See the amp chart for settings.

The root gap increases penetration, and also makes it easier to control the penetration. More filler rod needs to be added during welding to fill the gap, and tacking the two sheets before welding requires a bit of technique.

If two sheets are very close together they can be tacked using a tight arc length without problems. If there is a gap between the two sheets then there is a tendency for two separate pools to form, melting away both sheets without joining to form a single weld puddle.

In the photo the tack has been attempted on the edge of the joint. While it would be easier to tack a little distance in from the edge, the edge will need to be welded at some point and it's easier when it's cold. Also we avoid the need to weld over the tack as the joint is welded. 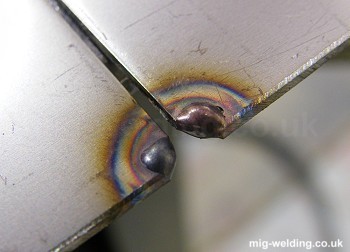 To avoid burning back the sheets the filler rod needs to be added very shortly after starting the arc and before the weld pool has had a chance to burn the corners away.

The filler rod has two functions. It bridges the gap between the two sheets allowing a single weld pool to form, it removes heat from the weld pool preventing the sheets from burning away.

In the video the arc is started, filler rod very quickly positioned in the joint. Then the weld is continued for a short distance along the plate. We plan to start the weld on top of the tack, and if the tack is too short it will melt and break apart when the weld is started.

If the tack causes the gap to close up too much a tap with a hammer on the tack should spread the gap again.

The basic technique is identical to laying beads on the surface of plate in the TIG technique page. A steady torch movement, tight arc, and filler rod added to the very front of the weld pool. In the video the material is 2mm stainless, there is a 1mm root gap, and the weld was carried out at 45amps using 1.0mm filler rod.

When laying a bead on plate or when the two sheets are touching there is no need to add a lot of filler rod. On the technique page the filler rod was just dipped into the front of the weld pool.

The butt weld in the photograph had a 1mm root gap (the two sheets were 1mm apart) and sufficient filler rod had to be added to fill the gap. In the video the filler rod is being fed in with the stamped end first, and later in the video it is possible to see the filler rod being pushed in to the front of the weld pool.

A great deal of heat is drawn from the weld pool to melt the filler rod. Adding the filler material independently of the arc is a big advantage of TIG - the rate at which the filler is added can be used to control the heat in the weld.

The photo shows the keyhole that forms ahead of the weld where the two sheets have burned back a little. The photo exaggerates the size of the keyhole - it's 3mm plate with V preparation that tapers to a point for the purpose of photographing a keyhole. Normally it would be a lot smaller. The keyhole is visible during welding and is a useful indicator that the weld pool has melted the sheets.

Once the hole has formed the molten filler is attracted to the back of the hole by surface tension to form the weld bead. This closes the keyhole and the hole is advanced forward by manipulation of the torch.

With stainless and critical mild steel joints, back purging would be essential when using this technique. 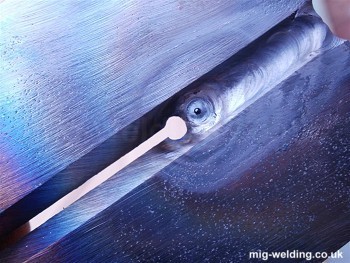 TIG is rarely used for metal over 6mm as it would require multiple runs to add sufficient filler material to complete a join. Thick metal is generally prepared in a V as in the arc welding flat joints page, TIG is often used for the root pass, then Arc welding used to complete the joint.