The main thing that sets outside corner joints apart from other joints is the poorer gas coverage. There is no steel to bounce the gas off, so the gas sails off past the weld rather than hanging around to protect it. We've increased the gas flow from 6L/min to 9L/min for this joint, and while we've stayed with a number 7 gas shroud a slightly larger one could be used to improve gas coverage along the joint.

The tungsten stick out is reduced to about 4mm. Visibility of the weld is no problem so it makes sense to weld closer to the gas supply.

In an outside corner the weld is effectively on two edges which will tend to burn back, so amps are also reduced from the butt welds - we've used about 50 amps with a 1.6mm tungsten and are using a 1.0mm filler rod.

All joints are welded from the top where possible - it is much easier to turn the structure onto it's side than it is to TIG weld vertically, but for an outside corner that means your hand will be well off the bench. To maintain an accurate torch position we're using a suitably sized block of wood to rest the torch hand on.

The weld looks a little more silvery than the earlier joints. That's because we are welding stainless which is very sensitive to gas coverage - the silver colour is surface oxidation which can be removed with a polishing wheel.

The amps and speed of travel are set so the weld just melts the edges of the corner leaving a smooth curve.

Welding the inside of a corner (fillet weld) will generally result in a stronger weld than welding the outside of the corner. A fillet weld adds reinforcement to the joint where the weld on an outside corner will tend to end up slightly thinner than the parent material.

We could achieve a stronger joint by leaving a gap between the two sheets (an open corner joint) and then going for penetration as in a butt joint. Stainless steel would need a shielding gas purge on the rear of the joint. 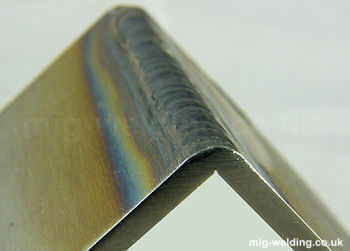 Back to: Welding: The DIY Guide > TIG Tutorial top