The principle of welding joints in thick metal differs slightly between MIG and Arc welding. With MIG welding it is the heat of the weld pool formed by molten filler wire which melts the parent metal to form the weld, so power needs to be increased with increasing metal thickness to prevent the weld pool from freezing before it can penetrate.

In Arc welding, the arc melts a crater into the parent metal creating the weld pool and filler from the rod is mixed in. This makes it much less prone to cold joints than MIG, and allows thick metal to be welded in multiple passes without the need to increase amps or rod size. 'Flat joint' just means the work is flat on a bench and is welded from above. It's also known as '1G' position. Horizontal and vertical joints will be covered later on.

Accurate joint preparation is very important in arc welding. It is very difficult to weld joints with large or uneven gaps.

The photo shows a 6mm plate butt welded using exactly the same technique as in the video on the learning arc page. The two plates were positioned tightly together, and 3.2mm 6013 rods were used at 120 amps.

While it would be possible to increase penetration by increasing rod diameter and current, it is more efficient to prepare the joint. 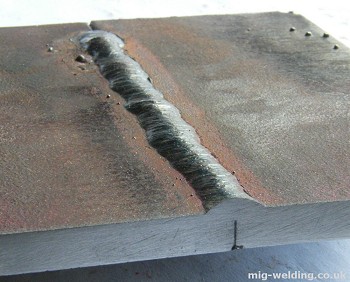 A "Single Vee Butt Joint" is a common way to prepare thicker metal when a full penetration joint is required. A 60 degree V (30 degrees on each side) is ground into the two plates.

The V doesn't extend to the bottom of the plates - a root face is left. This is normally about the same height as the rod diameter (2.5mm in our case) and reduces the chance of blowing holes.

To aid penetration the two plates are spaced apart. We've used a TIG rod as a gauge to form a 2.5mm root gap (again the same as the rod diameter). Different welders will have their own preferences for joint preparation.

The volume of filler metal required to fill the vee joint is greater than can be added in a single pass, so several passes are required. These are described below. 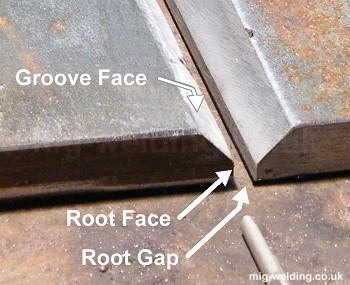 The first pass is the root pass. This is intended to fully penetrate to the rear face of the joint. We used 2.5mm rods (these run at lower amps than 3.2mm rods so reduce the chance of blowing holes). Around 70 amps is a good starting point, but if you find yourself blowing holes try slightly lower amps or adjust the root gap.

The root weld is easily the trickiest weld we've covered so far. It's similar to welding thin metal which is something arc welding isn't well suited to. There is a very fine balance between insufficient penetration and blowing holes. A consistent tight arc is important as that will keep the heat low, and a very controlled movement is necessary, speeding up a little as the plate warms up. A very slight weave can help control the arc.

We ran out of rod halfway through the root pass. The weld has been ground back at a gentle taper. We started the next rod at the start of the taper, so by the time it reached the gap it was hot enough for full penetration. The transition was ground to the level of the surrounding weld prior to the next passes. 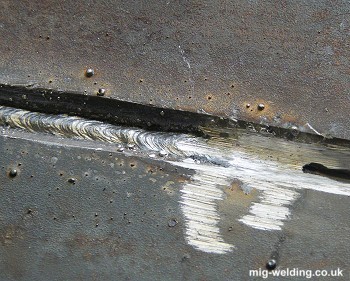 It takes very accurate technique to avoid blowing holes. (Spend a day practicing root welds and the rest of your arc welding will move on enormously). Signs that a hole is about to blow through are a little keyhole that opening up in front of the rod and a hollow sound to the arc. Holes can be countered by reducing the arc gap and then speeding up a little to avoid new ones.

If you do struggle with holes then reducing the root gap a little will make the root very much less sensitive to amps and technique at the risk of reduced penetration.

We cheated and avoided blowing holes by using a welding bench under the work as a heat sink. We were running a little hot so our penetration is a little wide. Without the cooling effect of the welding bench we would have blown a hole. It is common to use TIG for the root as it's a lot easier to control and less cleaning up is necessary afterwards. 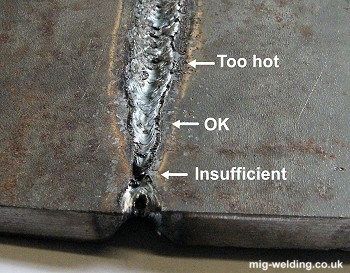 The root weld needs to be completely cleaned of slag before subsequent passes, and any unevenness smoothed out with an angle grinder, else subsequent welds will also be uneven.

Our weld was finished with two further stringers laid with 3.2mm rods at about 110 amps. A stringer is a bead welded without any side to side weaving. These are a lot easier than root welding as with the root in place there is no longer much risk of blowing holes.

The diagram to the right shows roughly what we were trying to achieve. After the root weld (1) was cleaned up a single stringer with a slight weave was made to form half of the weld (2), then a second stringer used to complete the weld (3). 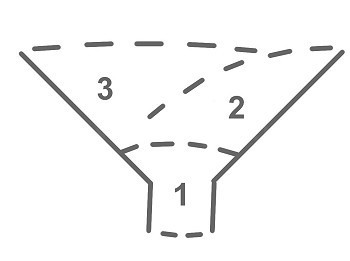 The angle of our joint was a little wide and we didn't quite fill the joint. A 60 degree joint would be easier to fill, and we could have reduced amps a little or weaved a little more to increase fill.

The technique can be adapted for thicker material - had we been welding 12mm plate we would have added a further 3 stringers on top to complete the weld.

At the bottom of the 3rd pass there is a slag inclusion. This is probably due to slag not properly cleaned from the edge of the root or second pass. A good wire brush would have removed the slag at the edge of the weld that chipping didn't remove, or an angle grinder could have been used to clean the weld between passes. 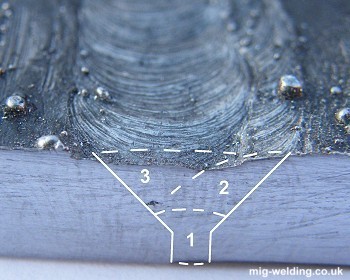 It is possible to increase the fill rate of the rod by using a weaving motion. In the video a single weaving cap weld is used to complete a single vee joint. A slightly curved side to side motion is used to widen the weld and increase the fill. The direction is reversed when the arc reaches the edge of the V.

The flux covering the weld will make the weld appear wider than it really is. It can be tricky to judge the width of weave necessary. One trick is to draw two chalk lines on some scrap, try to weave between the chalk lines leaving the weld at the edge, then remove the slag and see how close you got.

An alternative motion is a "figure of eight". This can help regulate speed, concentrates the arc on the edges of the weld, and tends to result in a higher fill.

The cap weld is wider and lower than a single bead. Had the other side of the joint been prepared and welded in a similar manner the joint would have had close to full penetration.

The advantage of welding both sides is it reduces distortion and reduces the number of passes required for complete penetration. The capping weld will shrink as it cools and pull the work into a bend. If the plate was welded from both sides the weld on the reverse would tend to straighten the work.