Arc welding is only really suitable for metal over about 3mm. It can be used down to 2mm but becomes very fiddly and difficult to control. It's no good at all for welding cars! For metal below 3mm a MIG or TIG welder would be more suitable.

Which Welder to buy?

Even the cheapest Chinese inverter welders perform reasonably well, but at the time of writing (2010) they aren't known for their reliability or support. There are many reports on the forum of cheap inverter welders failing within a few weeks of purchase. eBay tends to be the source and warranties can be tricky on there. Chinese made welders are best purchased from established UK based suppliers who can satisfy the warranty. It is in the interest of these suppliers to supply half decent ones to save on warranty claims.

Inverter welders do go wrong - they can be sensitive to knocks, power surges from the mains, dust and internal corrosion. Repairs will often cost more than the welder cost to buy in the first place. The difference between Chinese and European made inverters tends to be how sensitive they are to damage. And as a result how long they last. 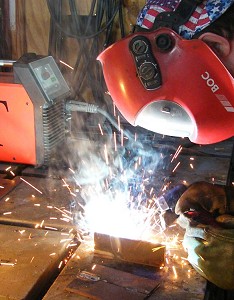 The power source used in arc welders is very similar to the one used in TIG welders, and most (if not all) TIG welders can also be used for arc welding with the addition of a rod holder.

It doesn't work the other way around. TIG requires some extra features - a gas valve and HF start (an easy starting method that avoids tungsten contamination). If you also want to TIG weld it's best to start off looking at welders that are sold as TIG welders.

In more detail - what to look for?

Aside from that the main choices are price, robustness, size, efficiency on a limited amp supply, and typical life time (which will depend on the quality and also on the type).

Some expensive welders will test themselves at an ambient temperature of 40 degrees, some will test at room temperature, and others prefer it chilly. Also the time the duty cycle is measured over will vary between manufacturers. 10 minutes is the normal standard, but the cheaper welders often go for 5 minutes, instantly doubling their duty cycle. Very cheap welders with low duty cycles won't burn a rod before thermal cut out.