Wire speed is probably the most important setting on a MIG welder. This page is intended to help you fine tune your wire speed and includes a video to demonstrate what the different speeds sound like.

Many wire speed adjustment problems are due to wire feed set up issues, so it's worth checking that page if this one doesn't help.

It's possible to weld neatly at the wrong power setting - penetration might be too little or too much, but the welds can still be neat. Get the wire speed wrong and it can become very difficult to weld at all. The trick to finding the right wire speed is to experiment.

Adjusting wire speed on the fly while welding a scrap piece of steel is a quick way to test. Set the welder to approximately the right power setting for the thickness of metal, start welding, and while welding alter the wire speed knob until you get somewhere near. 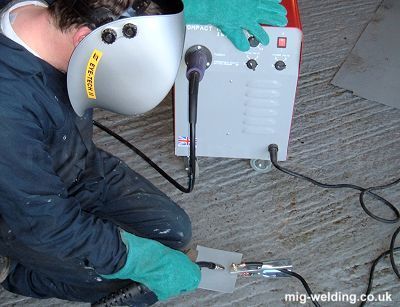 In the video the wire speed has been gradually increased from very slow to very fast. The captions at the top show where I think the wire speed is too slow, good, and too fast.

Be sure to turn your sound on - the sound of the weld reveals what is happening more than the images. There's a control at the bottom of the video you can move to listen again to each segment.

The wire feed starts at zero. It takes a little turning to get it going at all.

The wire is making occasional contact with the metal, but as soon as contact is made the wire burns back (forms a ball and melts back to the contact tip).

The wire is still burning back after contacting the metal, but the process is repeating more quickly.

The wire is going fast enough to give a constant arc to the metal, and there is a nice consistent sizzle sound to the weld. (said to sound like bacon frying, though I fail to replicate the sound with my cooking. Maybe a more expert hand holding the frying pan might get closer.)

The weld is still consistent but but the crackle is starting to sound fierce and the penetration is increased. Cheaper welders might start making a machine gun like noise at this point.

Wire speed actually controls welding current (the power knob on the welder only sets the voltage). Increasing the wire speed past the point where you achieve a nice consistent weld will only increase the current and can cause blow through on thinner steel.

Here the wire is moving so quickly that it bends as it hits the metal. The torch feels like it is being pushed away from the metal, and there is a lot of spatter.

Wire speed will need to be increased as the welder power setting is increased.

More expensive welders normally have automatic adjustment of wire speed - the speed is changed by the welder when the power setting is altered. On my Portamig 181 a setting of 5.5 is good for both low and higher power settings, and the wire speed knob is only there to allow tweaking.