It pays to practice a bit laying beads on the sheet metal you plan to use to develop some technique before trying any project welding upside down on a rusty car. If you plan to mess around with cars a good thickness for the first practice sessions would be 1.5mm or 2mm.

1.5 or 2mm is thick enough to stop blowing holes becoming a big issue, and is a handy thickness to use for experimentation with power settings.

Light use of a flap disc on an angle grinder will quickly remove surface rust and paint without thinning the metal. For more inaccessible areas an air grinder or dremmel can be effective. 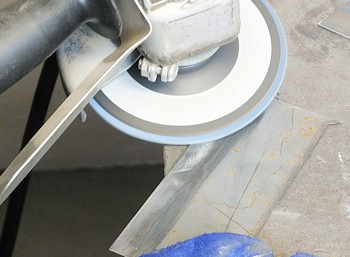 MIG can be used one handed but nobody does that because it can be used two handed as well. Throw away the hand held mask that came with the welder and buy a full face helmet, preferably an auto-darkenining helmet. Welding control will be further improved if you can rest an arm against something solid.

In the photo one hand is resting on the bench and steadying the front of the torch while the other hand (the right hand for right handed welders) holds the handle and operates the trigger.

Both hands ought to be wearing gloves to protect from UV light. No arcs were struck in the photo. 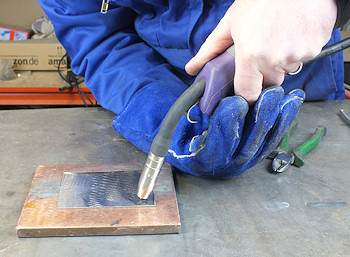 The end of the shroud should be close to the work without actually touching the weld. On thin metal around car bodywork thickness a very short arc is the way to go - it doesn't much matter if you bounce the shroud off the weld occasionally as you go along. For thicker metal over 4mm the weld takes longer to cool and the shroud will tend to fill with spatter if it contacts the weld so a small clearance is useful. 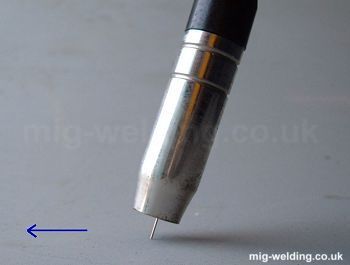 It's much easier to lay weld onto a sheet of steel than to do a join, so it's best to practice technique that way. Move the torch in a straight line and adjust the speed to keep a consistant puddle.

If the weld pool becomes too large (welding too slowly or too high power settings) it might create a hole in the metal. Weld too quickly and the weld will not penetrate through the metal.

Practice laying welds until the welds start looking neat. It should only take a couple of hours practice to get a feel for MIG welding.

Spend a little time laying welds on sheet to get a feel for welding on different power settings before trying to join two pieces of metal. And keep working through the tutorial for more tips. 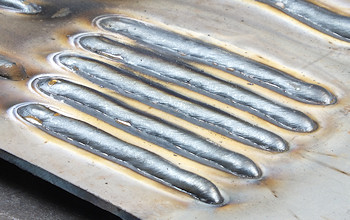 What mistakes are you going to make?

I've taught a few people to weld and the same mistakes happen every time. Here are some trouble-shooting tips for when the same thing happens to you:

You'll hold the torch too far from the metal

The arc sounds a bit different in this video - the expensive welder masked the effect of too much wire stickout so we used a cheap welder for this video.

You'll move the torch too fast

You'll end up with a tall thin weld if you move the torch too fast. doing it that way, and you'll have real trouble joining two bits of metal together later on in this tutorial. The beads on 2mm sheet in the large video above are around 6mm wide and 2mm high.

If you go too slowly you will put too much heat into the weld, but this is rarely something beginners will do.

The reason many people move the torch too quickly is the first practice sessions are on car bodywork thickness sheet where it is easy to blow holes. Try 1.5mm or 2mm sheet until you get the hang of it and move to thinner sheet later. 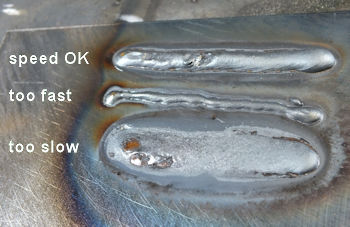