Aluminium is a very reactive metal, and bare aluminium will form an oxide layer in minutes. (Fortunately the oxide layer protects the aluminium from further corrosion and that's why it lasts so well). But the reactivity of aluminium poses a safety concern. Aluminium dust and shavings left over from cutting or filing can catch fire especially if mixed with steel dust when the mix is known as thermite.

You'll probably need to set up your welder for aluminium wire before trying a weld.

Aluminium welding of thin material is much easy with AC TIG even for a beginner. It's a struggle with MIG, though reasonable results are possible with the effort described below.

The oxide layer needs to be removed from the aluminium immediately before welding. A stainless steel wire brush is sufficient to remove the oxide and leave a clean surface. The edges of the aluminuim should be cleaned with a file.

It's best to use a new wire brush that hasn't been used on steel, and to brush in a single direction so the oxide isn't rubbed into the aluminium. 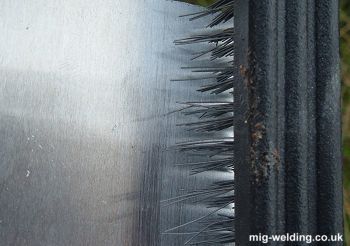 Aluminium welding is trickier than steel welding. There is a fine line between no penetration and blowing holes. This is due to the wonderful combination of a low melting point and high heat conductivity.

I've found that using a power setting similar to the equivalent steel setting, and roughly double the steel wire speed, then moving the gun very quickly seem to do the trick. Using thicker would reduce the chance of crumpling up and reduce the wire speed.

The problem with moving the gun very quickly is the weld doesn't end up TIG weld neat. Took a lot of practice to get this far. 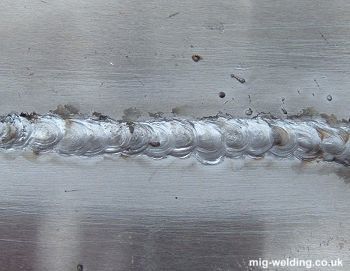 The weld to the left is the reverse side of an aluminium weld where the edge of the metal was not cleaned before welding. The oxide layer on the edge prevented the two sheets from mixing and has left a crack in the weld. The oxide has twice the melting temperature of plain aluminium, so it doesn't melt during the weld process.

The weld to the right is the reverse side of a weld where the oxide later was removed from the edge of a sheet using a rasp file. There is a smooth join between the two sheets of aluminium. 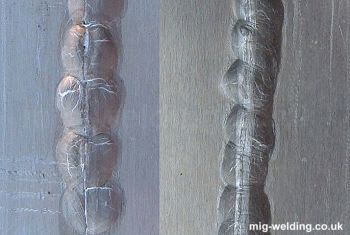 Brass has a much higher melting point than aluminium and it is also quite inert which makes it an ideal material to use as a heat sink.

The brass heat sink is effective when clamped immediately behind the aluminium to be welded. Here I've clamped two off-cuts of brass bar approximately 20mm thick to the rear of the aluminium sheet. 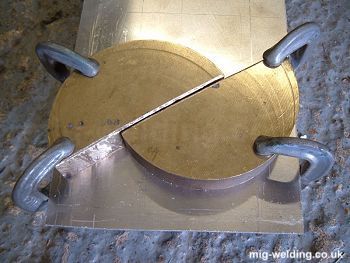 The heat sink takes a great deal of heat from the weld, so the welding motion can be much slower and hence neater. The slower weld also reduces the build up of aluminium so there is less weld to file off for a flat finish.

aluminium with a heat sink can be welded with much the same technique as you'd use for steel. I've settled on the technique I use for thin steel - short bursts. 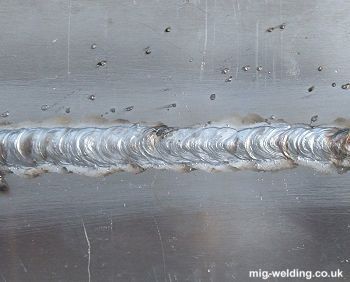 The reverse of the weld is flat where the molten aluminium contacted the heat sink. The weld is strong and there is very little aluminium to file away.

For aluminium welding it is best to hold the torch nearly vertical and weld away from yourself (push rather than pull). This ensures that you weld into the shielding gas rather than away from it.

The weld to the left was made using a pull technique, and the weld to the right using a push technique. The right hand weld looks much cleaner, presumably due to a better coverage of shielding gas. Arguably a slightly higher gas flow rate would have improved the weld still further. 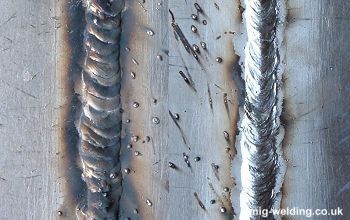 An ordinary steel angle grinding disc would become clogged when cutting or grinding aluminium. Special grinding discs are available for aluminium, and I'm told stone cutting and grinding discs work well. Alternatively aluminium is quite soft and can be cut using a metal blade on a jig saw.

If a flat surface is required then the aluminium should be filed. An ordinary metal file would be clogged, but a rasp file (with sharp teeth spaced around 1mm apart) is very effective. A similar rotating file is available for air grinders for those difficult to reach parts.

Aluminium welding seems to be the preserve of experts. There is not a lot of reading material, and if you use the same equipment and techniques as steel welding then you'll come up against some frustrating failures.

Having said all that, it's not all that bad. It's trickier than steel, so if you need to learn welding then steel is by far the best place to start. Once you can do a passable steel weld, you should be able to do an aluminium weld either by welding at supersonic speed or by using a brass backer to take the heat out.

Having managed my first passable aluminium welds I can understand why TIG is used for anything that needs to be neat. You can weld aluminium foil with TIG! Sadly, a cheap AC TIG welder costs 5 times as much as a reasonable MIG.

It's almost impossible to buy plain aluminium - it tends to be supplied as an alloy (a good thing as mixing the aluminium with other things makes it a more useful material). The alloys have a 4 digit identification number. I've been using a sheet of 5125 ("got some stiffness to it" according to the aluminium shop). 5000 series alloys contain a bit of Magnesium. The welding wire you buy will tend to be a 4000 series alloy (containing a little Silicon).

Since writing this page I've decided that using a MIG welder for aluminium is a pain. Though this page should help the DIY MIG welder who doesn't fancy spending money on a TIG. That's where I was when I wrote the page but I caved in.

The photo shows my first attempt at TIG welding aluminium. I've found it much easier than MIG welding aluminium, or even TIG welding any other metal. The TIG welder needs to have the option of AC current rather than just DC which prices it towards the £1000 mark. It doesn't require a heatsink, and a model without a foot pedal will work fine though it's nice to have the option to add one later (I didn't use a foot pedal for the work in the photo). 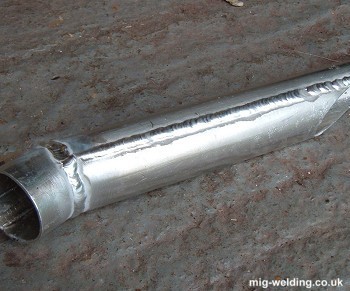