Cast iron can be welded perfectly well using a stick welder and nickel rods, or with pre-heating by a gas welder using cast iron rod.

But what if you fancy doing it with a MIG welder? It can be done, and without too much difficulty, although the resulting join won't be as strong as the more accepted methods. Professional welders look away now.

My lathe didn't cost a lot of money. It had been dropped from a forklift and a couple of the castings were broken. It's a Kerry Model C dating from the 1950s.

This is the gearbox used to motor the bed backwards and forwards for thread cutting. It's a tough project for a first cast iron weld as the alignment has to be spot on for all the gears to mesh correctly. 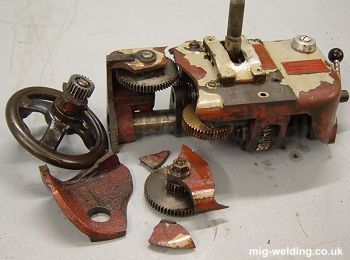 The obvious first step was to do a trial assembly to see how it should fit together. Turns out I had most of the parts I'd need.

At the time of writing a "How to MIG weld cast iron" tutorial didn't exist on the web so the first step for me was to experiment (and ask a load of questions on the forum). 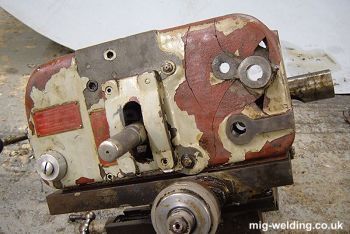 Here's a seam weld using mild steel wire without any preheating. The weld was easy to make and looks neat, but the casting made a lot of tinkling noises as it cooled suggesting internal fractures. In fact the two parts of the casting fell apart when the weld had cooled.

The stresses are caused by the weld shrinking as it cools. Mild steel is ductile and would draw under weld stresses. Cast iron is stiff and brittle so either the casting or the weld will tend to crack.

I tried MIG brazing wire instead of mild steel wire. The braze is softer than mild steel, and there were hardly any tinkling noises on cooling. The brazing was much less strong than the mild steel welding although it did appear to bond to the cast iron (the grey marks in front of the mild steel weld are the remains of a brazed joint). 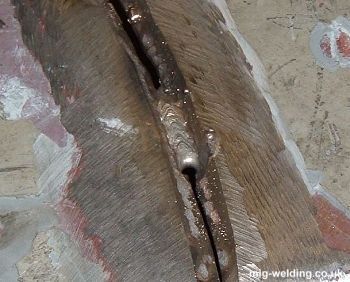 I decided to use studding to give the joint some mechanical strength.

Studding is a good way to get around some of the issues of cast iron welding. I drilled and tapped one side of the casting and screwed in a number of studs. Then I made some slots in the other side of the casting using an angle grinder. The studs would then be welded into the the slots, so the gap is held together by flexible mild steel studs rather than a weld with a crack in it.

This is the door to the tool compartment and seemed more than strong enough after the studs had been welded in place. 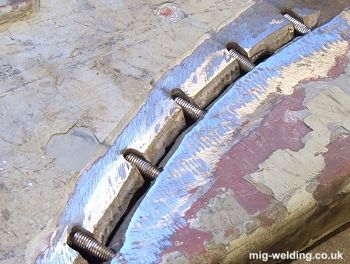 Preparing the gearbox casing for welding took the best part of an afternoon. I made studs to hold the major parts together, then prepared the joints in a V shape. I left the original fracture for about a third of the thickness to align the broken parts. 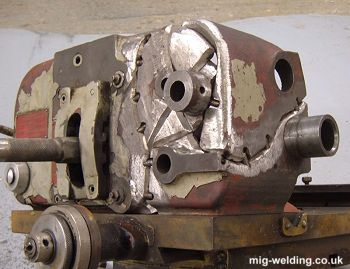 In hindsight I should have used stainless steel filler wire here - see the note at the bottom of the page. 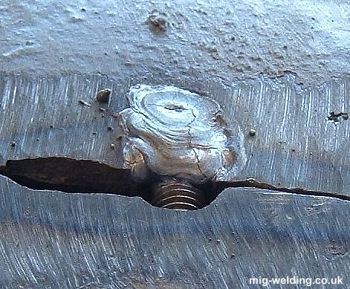 The answer was to weld to just one side of the stud. The flexibility in the stud allowed the weld to contract on cooling without cracking.

It was really cold in the workshop, so I pre-heated the casting with a blowtorch to about 60 degrees Celsius before welding. 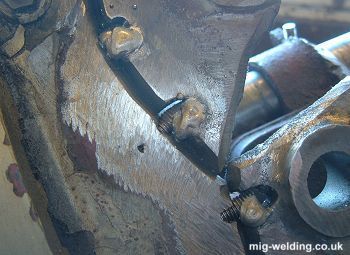 Here the studs have been welded in place, and two triangular pieces have been mig welded on two sides. The repair is already quite strong.

But it all sounded too much effort so I decided to braze instead. 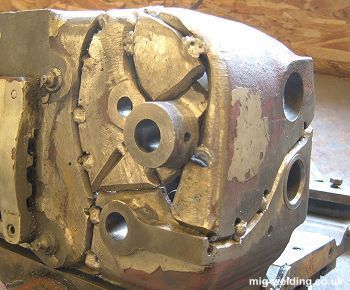 Braze is much softer than mild steel welding and hence is less likely to crack on cooling. Even so it has to be done in small lengths and then allowed to cool enough to touch before welding any more. I got carried away on one section and welded too much at once. A crack appeared to one side of the braze weld.

It took me a while to figure out how to braze a thick casting. The trick is to push the torch forwards in a straight line and turn up the power setting to get some heat into the casting. The casting needs to be hot enough so that the flux flows ahead of the braze (the flux is visible as a silver shimmering on the surface). Expect a lot of splatter.

There is more about brazing on the MIG brazing page. 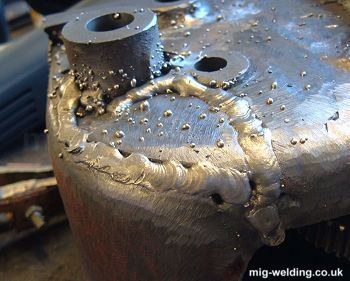 With the braze ground down the finished job looks quite neat. I could have gone to more effort filling in all the little holes, but the repair shouldn't be too noticeable once I've put a bit of paint on it.

It's not going to be the strongest repair in the world, but it doesn't need to be. The reason cast iron was used for the first place was it's a convenient way of making a complicated shape. It's never going to see a great deal of stress in use. I wouldn't attempt to weld anything structural or safety critical in this manner. 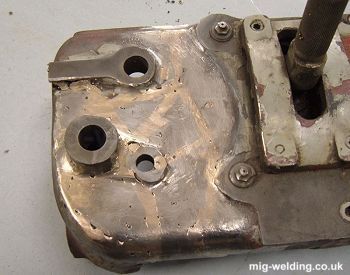 I'd made a few trial fits along the way, but it was still a great relief that all the gears fitted together and meshed correctly.

The lack of ductility of cast iron proved helpful as there is no perceptible distortion in the weld (although I'll admit one of the shafts was a slightly tighter fit than previously). 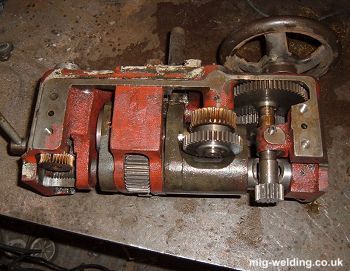 Here's the completed lathe in action. The casting is in the lower center of the photo below the frog's feet and the repair is largely hidden by the wheel.

The repaired lathe is fully functional and has seen a surprising amount of use since it was finally re-assembled (a whole year after the repair detailed above). 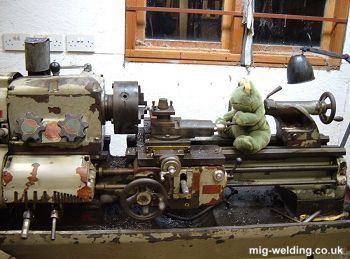 Cast iron - what else do you need to know?

Some thoughts I've picked up from books and the internet while trying to figure out how to repair this casting:

I read your article on mig-repairs to cast iron with some interest, and having been through a similar train of thought, but coming to a different conclusion, I thought I would share it with you.

The basic problem with welding cast iron is that it is, as everyone knows, brittle. It will crack if subjected to tensile forces. As your weld contracts it will tend to crack the iron due to differential thermal contraction. The traditional way to avoid this is to avoid the "differential" bit and to pre-heat the whole thing to as near the melting point of the filler rod used as practicable. This is the approach generally used with cast-iron filler rod.

There is another issue with cast iron, of a chemo-metallurgical mature. What makes it cast iron rather than steel is the very high carbon content. This tends to diffuse into your filler rod, causing unfortunate metallurgical transformations on cooling. An attempt to use mild steel to weld cast iron will leave you with a fast-quenched, high-carbon steel weld. You will almost certainly end up with Martensite, brittle and unmachinably hard.

The phase-transformation in which austenite turns to martensite (or pearlite, ferrite, or bainite, depending on carbon content and cooling rate) is at the heart of the problem. This occurs at about 720 degrees. It is also accompanied by a change in volume, which may cause more differential stress cracking issues. Both the austenite-ferrite (hot-cold low carbon) and austenite-martensite (hot-cold high carbon) transformations lead to an increase in volume, so ought to reduce the residual stresses slightly, and under conditions of slow-cooling this is probably true. However this sudden expansion on cooling of the weld pool will tend to crack the already solidified and transformed weld behind it.

None of this metallurgy happens in Nickel, so nickel rods side-step the problem, as does brazing. I am not sure what sort of bond nickel rods make with iron, but brazing material needs to "wet" the surface to stick properly in just the same way as solder. This might be why your thin-sheet mig-brazing worked well, and your cast iron brazing less so, perhaps the greater section thickness resulted in the material not getting hot enough for the braze to take.

There is, however, another common mig-welding filler rod which does not go through the austenite phase transformation, and that is stainless steel. As long as the stainless is austenitic (easily checked with a magnet, austenite is non-magnetic) then the phase change on cooling won't happen, and so you can afford a great deal of dissolved carbon without fear of creating a brittle, unmachinable, weld.

Armed with this theoretical knowledge I attacked the broken guide-arm of a mechanical hacksaw I had been given. Using stainless wire in short bursts (to avoid too much heat input creating thermal stresses elsewhere) I successfully repaired the arm, and it has shown no signs of breaking again yet, after 10 years of irregular use.

I've since tried stainless wire on cast iron and heard the tinkling sound on cooling. I reckon the braze is softer and more forgiving for thermal stresses. Though done correctly stainless would most likely be stronger. Everyone else uses Nickel, though that doesn't seem to be a MIG option.